When I started 8 Kinds of Smiles back in 2010, I had no idea that 8 years later, I would be asking my imperfectly perfect match to marry me. For those who don’t know, I met Anna when I shot her cousin, Jenny’s wedding back in August 2014, more or less 4 years ago today. We took our relationship slow at first, but within a year of meeting I had a pretty good idea that this was the girl I wanted to marry. In 2015, I even started bringing Anna on shoots as a 3rd shooter (our intern as we joked while we trained her). She’s since been “promoted” and regularly shoots as a 2nd shooter with me often these days.

While I knew within a year of being together that I did want to marry her, we were in no rush. The only timeline Anna gave me was that she wanted to be married in the year that she is 30 (she turns 30 in August next year). With that timeline in mind, I decided that 2018 would be the year I’d do it and told her frequently that it would be this year although the exact date was a secret. 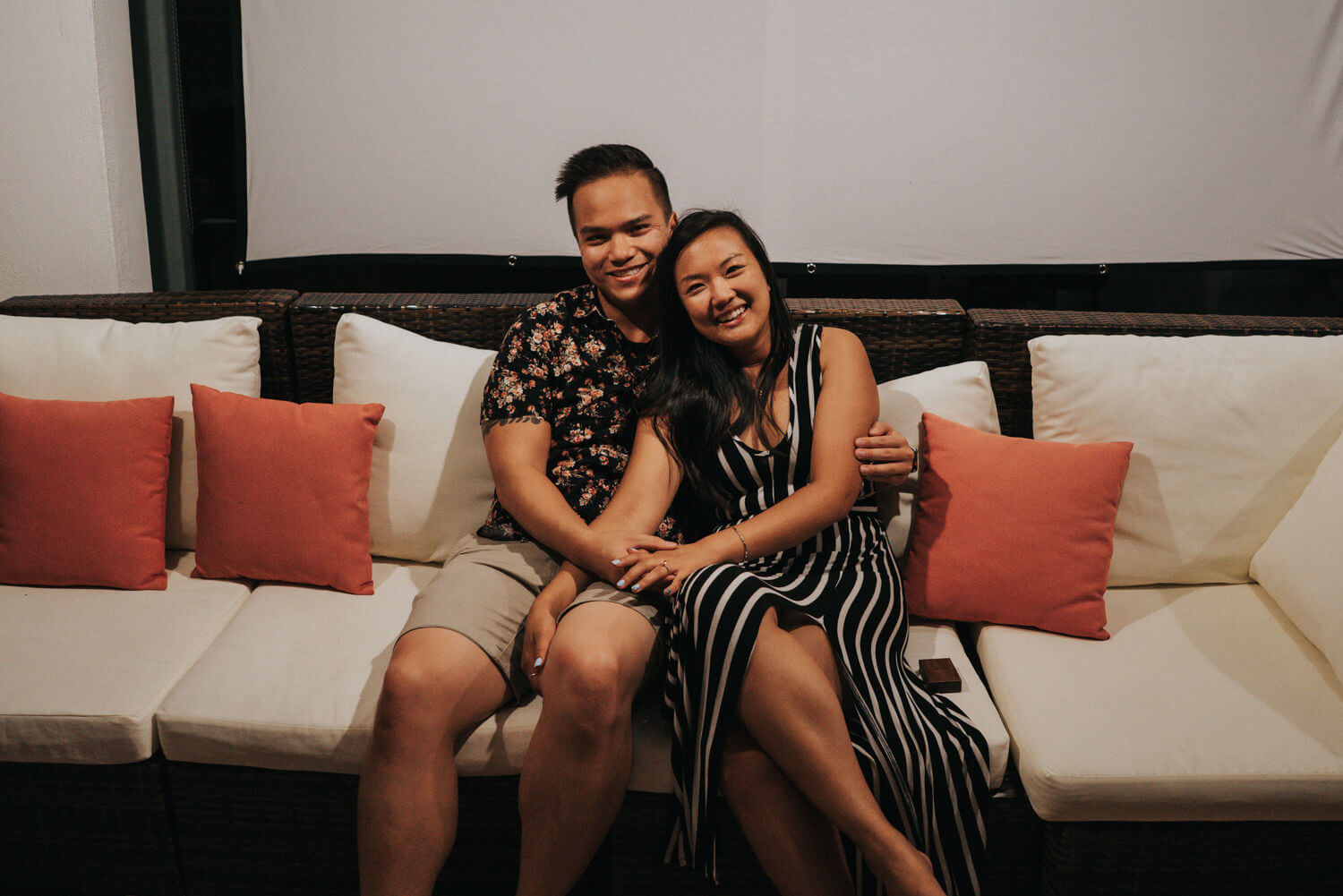 Inside I knew pretty early on in the year that around our birthdays (our birthdays are 3 days apart with hers being 8/21 and mine 8/18) which also coincides with the rough time of when we first met 8 years ago as well as me turning 30 this year… there was just so much going on around this time that it made sense to do it then. Once we decided we were going to Cabo for our birthdays, the initial thought was set.

So how did I keep Anna from thinking I’d do it this weekend? Well it’s thanks to her friend, Angelina, who lied for several months about not being able to go to Cabo. In truth, I secretly talked to Angelina in back channels letting her know my plans. Anna basically forbade me from proposing without Angelina there so I knew she wouldn’t be suspicious if she thought Angelina wasn’t going. With Angelina, Andrea, and Nina (some of her closest girlfriends) set to go on the trip, there was enough of her close peoples there.

In terms of the proposal, I always knew it would be some kind of video. Over the years, I’ve tried to shoot and collect a wide variety of videos from Anna and mine’s everyday ridiculous things we do to our cool trips that we go on. There was never really an end goal in mind, but when it came to for this proposal, it made sense to do a sort of greatest hits of all our our #avisadventures together. 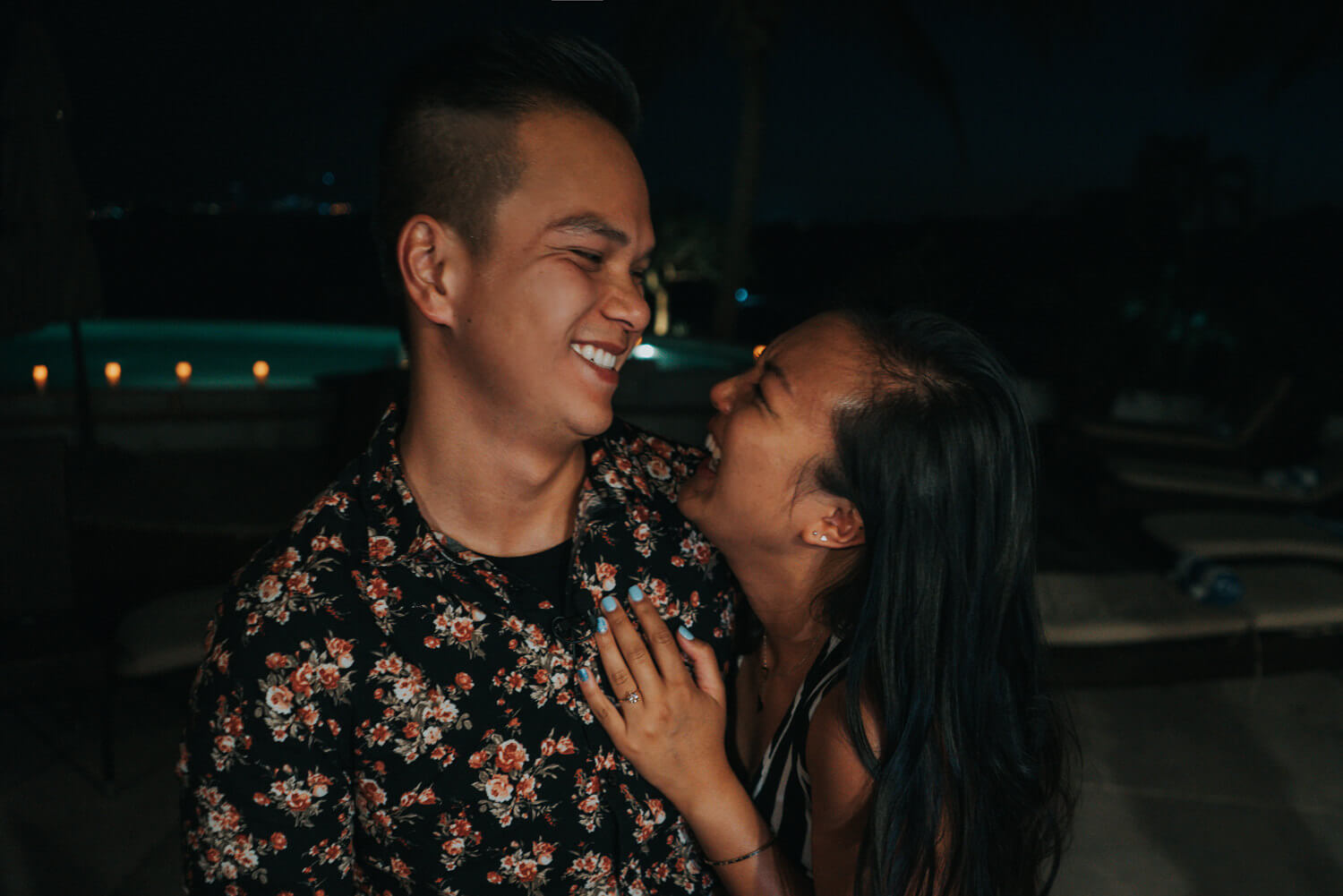 The other big part of the proposal was the incorporation of family. Anna is all about family. While her family wouldn’t be there in person, I knew I wanted to get them in the video somehow, especially the kids. From this came the incorporation of my own immediate family. I didn’t give people too much direction because I wanted their messages to be organic. In today’s day and age and especially for our relationship, I didn’t feel that it was a required step to ask her family’s permission, but I do believe that it is a good thing to do out of respect that Anna would have really appreciated it. So while Anna was away at her annual Red Cross camp for a week, I took her immediate family out for dinner and asked for their approval.

A lot of other things fell into place as the date drew closer, such as the livestream that I tried to do for select friends and family back home or the candles that I thought of last minute that friends in Cabo could hold during the video. I tried to have everything as planned out as much as possible, which helped to prevent any stress. Here’s a diagram, for example, that I sent to all our Cabo friends that outlines the whole play of how the proposal was going to work.

In it, you’ll see exact positioning for the projector and screen, the laptop (angled in a way to cover everything for the livestream), the 3 letter marked teal items indicating the 3 cameras filming the proposal, the 2 X’s marking Anna’s and my position, the O’s for our friends around us, and the arrow for the pathway on which she would be lead. 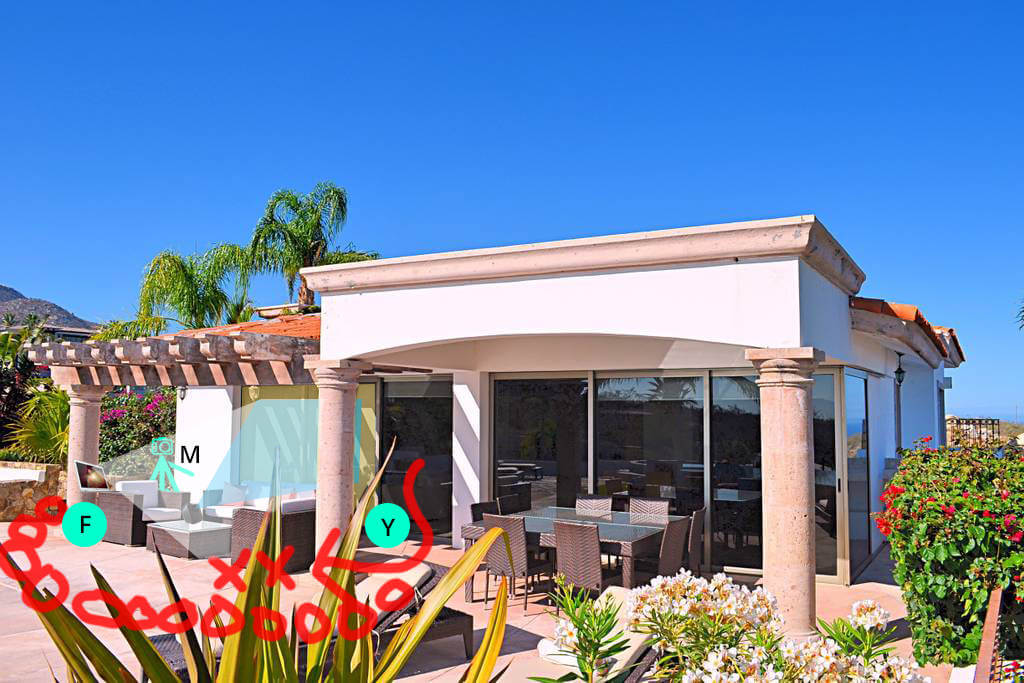 So was I nervous? Truth be told, in the moment I was not terribly nervous. In the video that I made for Anna, I timed the music at the end to give me a certain amount of time (45s to be exact) to say something to Anna before the music drops and the sound picks back up. This was to account for the final proposal video that you see here where she says yes just right before that drop. So as I was talking to her, I was also listening for audio cues to make sure my timing was correct :p.

In the couple of weeks leading up to the proposal, however, I honestly had random moments where I would think about the time when I would actually propose. In those moments, either a random wave of nervous excitement would come over me, or admittedly, I’d start tearing up a little.

From the ways in which we’ve spoken, I’ve always known Anna would say yes. But I suppose it’s difficult for someone like myself, who grew up a hopeless romantic, who literally documents peoples’ love stories for a living, to not be affected by the impact of such an occasion. Although we bicker here and there like any couple, I honestly feel sometimes like Anna and I continue to be in a honeymoon phase of our relationship. Her silliness, ridiculousness, and selfless and caring nature are just a few of the amazing things I love about her–that bring a smile to my face when we’re not around each other. I’m very happy I was able to put everything together for her in this proposal that incorporated a little bit of everything she loves, and I look forward to finally planning our own wedding (after getting so many awesome ideas at the weddings we’ve been in over the years) as well as our future adventures together. 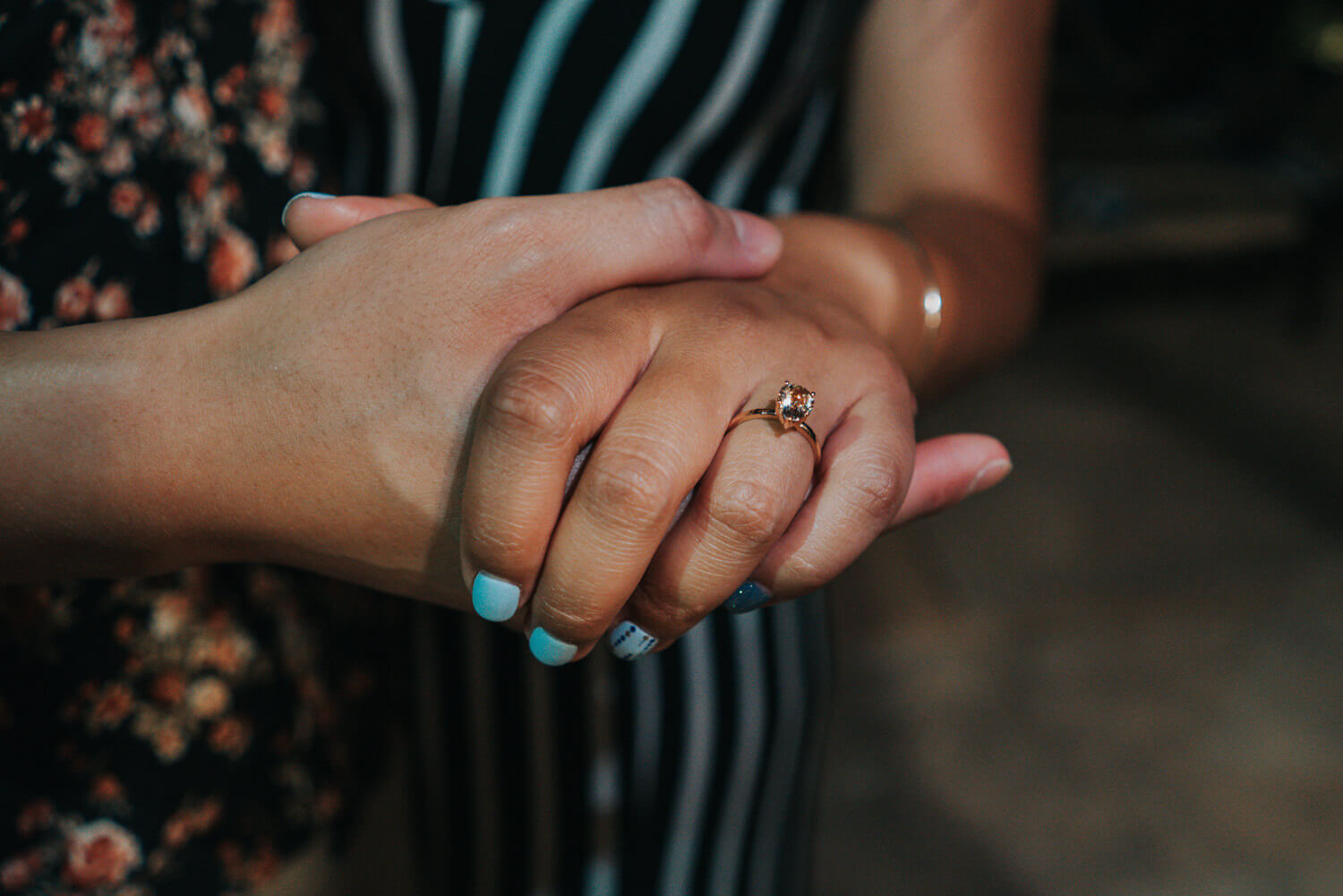 First he tricked me to think it was a birthday video, and then there were messages from our families approving an engagement!! I always told him that when it was our turn, I wouldnâ€™t cry because weâ€™ve seen so many proposal videos and we work in the wedding industry, but boy, did the tears AND boogers flow!! What made the video so special was including our families in it. Family is everything to me and having them be part of such a special day makes me so lucky and especially lucky to have found a man that understands how important my family is to me. My heart is so full! Canâ€™t wait to continue to spend the rest of my life with this talented, thoughtful, silly man I can now call my fiancÃ©! 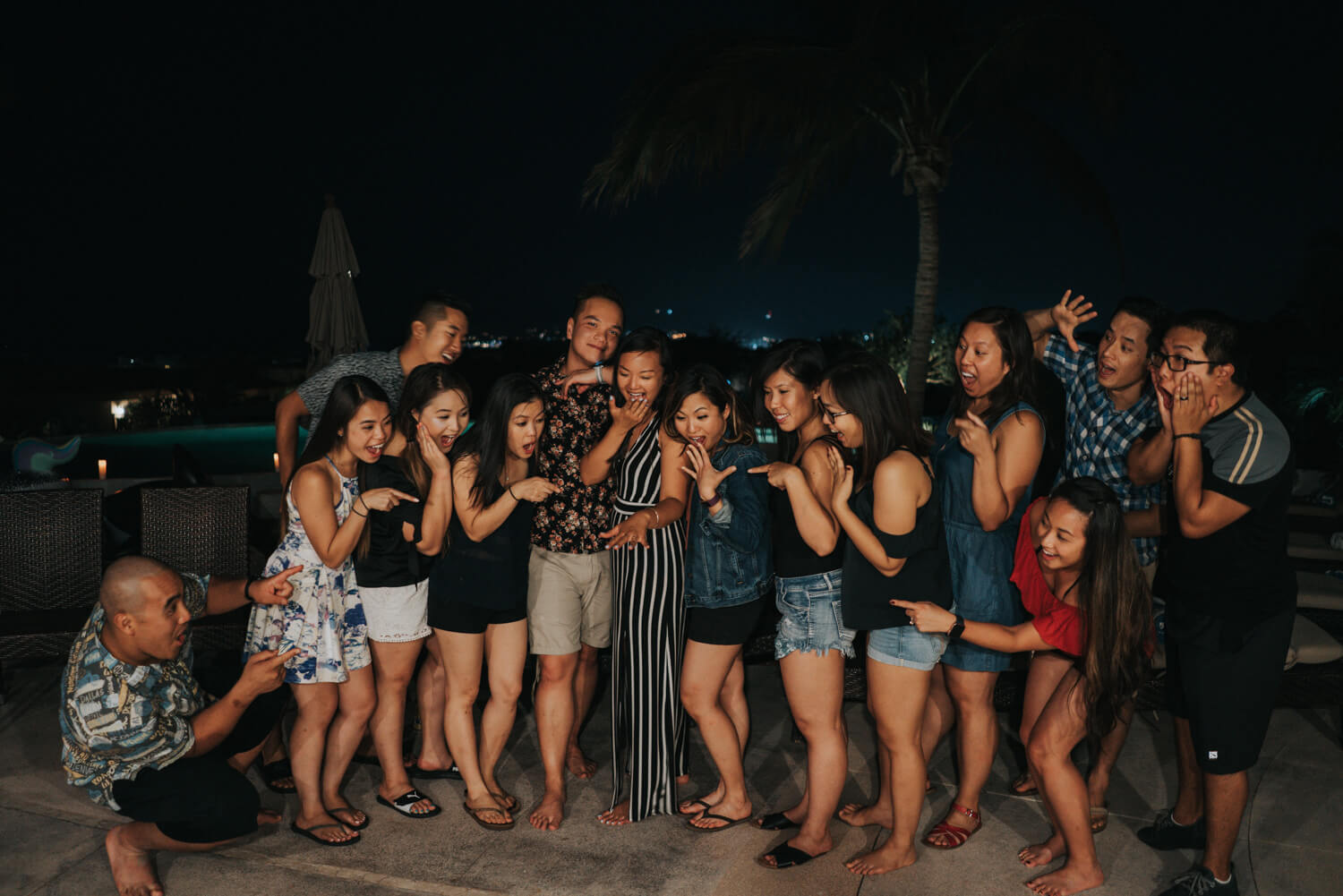 Lastly, a special thanks to:

– Angelina, Drea, Nina for lying to Anna for several months and helping distract her on the day of
– The Giang family for approving of me
– Jenny for coordinating all of the videos from the family
– Anna’s extended family (the kids) for contributing messages
– My family for contributing messages
– Mai, Yen, Felix for shooting the proposal (I shot Mai’s proposal and Felix’s wedding so they kind of owed me)
– All of our friends who joined us in Cabo to watch in person while holding candles in the background to add a nice touch of decor
– Friends and family back home who spent time checking out our proposal livestream even though it was dark and pixelated because our internet sucked down there